Ideally, the cooperation process between start-ups and companies or small and medium-sized businesses runs in three phases: Learn, Match, Partner. After getting to know each other in the “learn phase”, which can take place in various ways, which we will discuss in more detail here, the match phase involves working with potential cooperation partners. However, the cooperation is initially limited and serves both parties primarily to see if a long-term partnership is possible. This can be done either through the development of a joint PoC or a pilot project. Although the PoC differs in its original meaning from the pilot project, which we explain here, it is often used synonymously in the cooperation context. In order to provide more detailed information and a better overview, we dedicate an article to the PoC in Startup Cooperations in our series “Startup Cooperations”.

The use of PoCs in startup cooperations

The term Proof of Concept classically refers to a proof of feasibility. This involves checking whether a product or idea is sufficiently developed to be realistically implemented on the market. It is provided by both start-ups and companies, but is particularly relevant for start-ups, as they usually have to present a successful PoC in order to attract investors. This type of PoC will be discussed in more detail in another article.

At the same time, there is also the possibility that startups and their cooperation partners develop a joint PoC. This is not a proof of concept in the classical sense, but rather refers to whether the product or service offered by the start-up is implemented in the core business of the company and can function in its market. In addition, the joint collaboration can first be tested before starting a long-term cooperation. In the joint cooperation context, the term PoC is often used synonymously to the pilot project, which, although slightly different from its actual meaning, is still widely used. We explain how a joint PoC works in the context of a cooperation between startup and company. 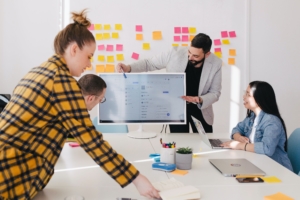 Process and goals of a startup PoC

The way a PoC is carried out can vary depending on the industry, company form and objective. Whether the PoC is fully demonstrated in order to attract investors or whether it is first developed jointly in the context of a cooperation, it is of particular importance for start-ups in both respects, as it can mean the next step on the career ladder. The procedure of the PoC developed in cooperations is largely the same as the process of a pilot project. Like this one, a joint PoC allows to start the collaboration in a small, risk-minimized framework. Ultimately, the PoC is used to initiate a long-term partnership, so it is important to define the process and the joint steps from the outset. Both cooperation partners should know exactly what tasks they have to take on.

In addition, the KPIs should also be defined at the outset so that it is clear to both parties what criteria they will use to evaluate the collaboration and then decide whether a long-term collaboration is appropriate for them. The advantage of a PoC is that little commitment is required due to the low risk, so that even companies that are sceptical about start-ups can be convinced. If, after a successful PoC, both sides now agree that they want to start a long-term cooperation, this is exactly the kind of commitment that is required. After all, in order to enable both parties to achieve a sustainable win-win, it is important to take the important step from PoC to long-term cooperation.

What needs to be considered and what challenges can arise?

Collaboration during a PoC in a cooperation context is usually similar to collaboration during a pilot project. Therefore, problems that may pose obstacles in a long-term partnership can be identified early on. One of the most frequent challenges are the cultural differences between companies and start-ups. In order to master these, communication should be open and transparent. It is also important to accept the way the other side works and to meet each other halfway in order to build the best possible understanding of the cooperation partner. This is the only way to create mutual trust and build a relationship, an important basic requirement in cooperations, which is especially important for medium-sized companies.

Furthermore, the cooperation partners should show real willingness to integrate innovation and innovative work processes into their company. Rarely can it happen that the company has no will to change its internal structures and processes, but only wants to improve its image in order to appear innovative. In these cases, one speaks of Startup Washing or Innovation Theater. This hardly benefits either party, and should therefore be avoided, which can be achieved through good communication. 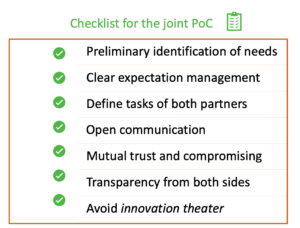 The PoC thus lays the foundation for any potential cooperation. If it actually refers to the first, fundamental step towards cooperation, it is often used synonymously in the context of pilot projects or the like. This refers to the already mentioned use of PoCs in start-up cooperations. Here, companies and startups start a joint test version of the cooperation. Similar to pilot projects, this type of proof of concept serves to get to know each other, to identify potential problems in a partnership and to learn from them at an early stage.