A Minimal Viable Product, or MVP for short – every start-up should have already dealt with this, as it represents an important stage in product development and offers many advantages. In this article, we explain what these advantages are, what makes an MVP different from a prototype, and how it differs from a prototype in our series “Starting cooperations with startups”. We also give some tips on what is particularly important in the development of an MVP and present some particularly successful case studies.

What is an MVP and how does it differ from a prototype?

MVP stands for “Minimal Viable Product”. Lean Startup author Eric Ries describes it as “Version of a new product which allows a team to collect the maximum amount of validated learning about customers with the least effort”. An MVP is more mature than a prototype, it is already a lean version of the final product which is strongly cost-benefit oriented. This means that while it is reduced to the most necessary elements, it should be fully functional as it is tested on the real market. The main features in which it differs from the prototype are development stage, scope, usability and the user group that tests it. The prototype is the development stage before the MVP, and is intended to illustrate how an idea works, communicate it and get feedback. However, it does not have to work, whereas an MVP should already be applicable. What exactly a prototype is, we explain here in the previous article of our series. It is built faster, usually several times in an iterative process, and so some ideas are discarded. Since the MVP concentrates on one idea, the amount of resources and the commitment is a bit higher. Nevertheless, even an MVP is based on the “Build-Measure, Learn- Cycle” according to the Lean-Startup method, so there should be the willingness to improve ideas as needed. While a prototype is only tested by a few users, the test group for an MVP already consists of the users of the product in the real target market. By developing only a simple version of the product for testing, risks can be minimized and development costs saved. 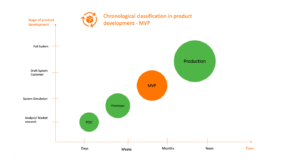 How is an MVP developed and what should be considered?

As already mentioned, the MVP, similar to the prototype’s Build-Measure-Learn cycle, is based on the Lean Startup method developed by Eric Ries. The prototype thus obtains feedback several times in advance and improves the product again and again. Based on the final version of the prototype, the MVP is then developed. The procedure for the MVP process is similar to that of the prototype, but at a more advanced stage of product development. First, those characteristics should be defined without which the MVP cannot function. The challenge here is to ensure that the minimum number of properties is small enough to make the MVP as inexpensive as possible, but large enough to fulfill the core functions of the product. There should therefore be a good balance between these two components. Spotify Co-Founder Henrik Kniberg illustrated the MVP development process in the sketch below. The sketch illustrates that in an MVP, functionality is more important than using later features.

With the help of the MVP, assumptions regarding the product concept can now be validated in a cost-saving manner. The MVP is tested on the real market with real users. Depending on the results, this process is iterative and the MVP is improved until it achieves optimal results. This test is done with the “light version” of the product, so to speak. This can be, for example, in a smaller local context, or an initially manual execution of processes that are later automated. When the final version of the MVP meets all criteria, it can be further refined and enhanced with features. The finished product can then be used to enter the market. The challenge in developing an MVPS is to achieve a balance between minimum features and functionality, as well as to work in a customer-oriented manner. In addition, startups should not be too concerned with details and perfection, so that a fast learning effect and innovation process is possible. 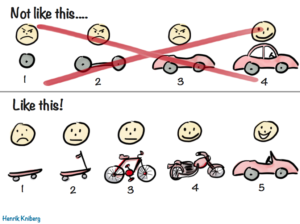 Creating an MVP is a practice that no start-up should do without. The fact that the method has proven its worth is demonstrated by examples of some of today’s globally successful companies, which once started out as start-ups and began to test their ideas with the help of MVPs. One of the best known case studies for a successful MVP is the demo video of Dropbox founder Drew Houston. He released a short YouTube video in 2007 in which he explains how Dropbox works and shows how to use it. This way he was able to achieve maximum effects with minimal effort. Dropbox registrations rose from 5000 to 750000 and within seven months the program had one million users.

The founders of Groupon also started with a simple WordPress page and sent out e-vouchers in PDF format manually by e-mail. Only when it became clear that there was a need for their concept did they invest in expanding the website. Spotify, which started as a start-up in 2006, also used its MVP very successfully. The founders Henrik Kniberg and Daniel Ek first released a greatly reduced version of the streaming service, and had it tested by friends and family. The version didn’t have any of today’s features like podcasts and playlists, but could only play a few songs. Based on the reaction of the test persons, the founders quickly realized the immense potential of the concept and worked out the later version, which is now successful worldwide.

Starting out with an MVP in the target market offers a number of advantages. Although more resources are expended than for a prototype, the risk is lower than for a direct market entry. Since the MVP is also based on the Build- Measure- Learn process, assumptions about the product can be validated and optimized. In a subsequent market entry, the risk of failure and the associated costs are significantly reduced. Furthermore, investors can be convinced with a minimum viable product. Therefore the MVP is a development stage that no start-up should skip in product development.