How do you actually start a successful cooperation with a start-up? How can this become a long-term partnership and which steps should the start-up have already taken? To answer these questions, we have developed the series “Starting cooperations with start-ups”. In the first article we will focus on prototypes of startups. The development of prototypes is an important step on the way to the finished product, and essential for startups. That the prototype is not yet the finished product is well known. But what is the exact process of developing a prototype and what are the goals behind it? What should be of particular importance and what advantages does a prototype offer? At which point in the product development process is the prototype used? And what exactly is the difference between a prototype and MVP? We would like to go into this in more detail in our series of articles “Starting cooperations with start-ups”.

What is a prototype and how does it differ from an MVP?

There are two types of prototypes, high-fidelity and low-fidelity prototypes. Low fidelity prototypes are as inexpensive as possible and can be built faster, whereas high fidelity prototypes are more sophisticated. Here, the more advanced the stage of development of the product is, the higher the fidelity of the prototype should be, but it also depends on the intention with which the prototype was developed. Thus, a prototype is also suitable for attracting investors, for example. Ideally, a more attractive or high-fidelity prototype is chosen. In addition, prototypes can be created in both analog and digital versions, usually as models or animations. Further examples and test possibilities can also be landing pages, A/B tests, fake buttons on the website, pre-sells, video trailers or storyboards. The difference between a prototype and an MVP is that the latter already represents a lean version of the finished end product. In contrast to the prototype, a Minimal Viable Product is already used on the real market, so it must be functional, even if it is still reduced to the most important features. 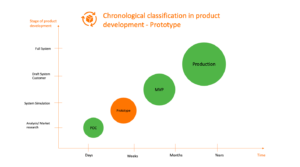 How do you develop a prototype?

Depending on the intention, the level of fidelity for the desired prototype should then be determined. Since product development ideally works with iterative processes, several prototypes are often used in the course of product development. The level of fidelity of these prototypes should improve as product development progresses. The next step is the presentation of the prototype and evaluation by possible test persons. Regarding the feedback, quality before quantity applies. The prototype does not have to be tested by the broad masses, it is important that the users who test it do so in detail. In this case, up to ten people may be sufficient for the time being. Rapid prototyping is particularly popular among startups. Here the focus is on carrying out the iteration process as quickly as possible in order to achieve early learning effects. As a rule, the prototype is worked on or further developed based on feedback until the result is satisfactory enough to continue with the development of the MVP (see graphic). 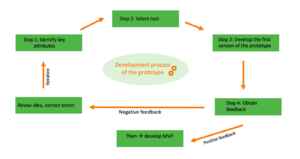 In conclusion, it can be said that the development of one or more prototypes is an essential step in the development of a product. Besides the possibility to convince investors, a prototype is ideal to get feedback at a reasonable price. This is essential to further develop the product and to determine the direction in which it will be developed. If the product has been sufficiently improved, an MVP can be created and then the market entry can be made. Thus, the prototype is a development stage that every start-up should pay attention to and place great value on.